skip to main | skip to sidebar

"First!" The closing ceremony orgasm, ending with a fertilized egg! 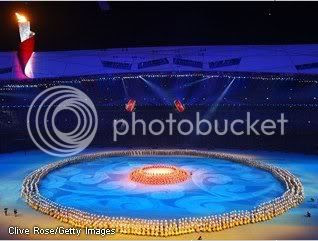 I have never had any urge to say "First!" before, but this is like laughing at the world's biggest joke. I've GOT to say "first," along, I imagine, with about a million other people.

I didn't see the whole closing ceremony. When I turned the TV on, the first thing I saw was a gigantic throbbing female orgasm: a huge circle of yellow-dressed young women, driven to excitement by an inner circle of artfully pounding red-dressed men, with a pair of ovaries floating forty feet above. 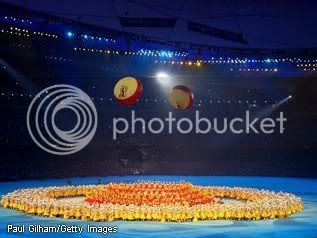 Excitement ebbs and flows in waves, then in up-shoots, first hard, then soft, building gradually, then quickly, until finally the entire vulva-shaped/ uterus-shaped Bird's Nest literally erupts in fireworks, which themselves first circle, then pulsate, before finally reaching a simultaneous explosion of blinding light that momentarily obliterates the entire Bird's Nest itself from the TV screen, which simply goes white.

Here we go. I found a video clip of The Orgasm (1 minute): 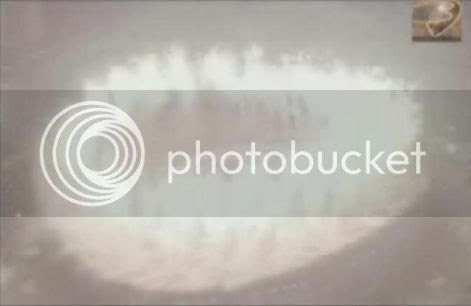 (Much longer source video from uZood, no longer available. I claim fair use for this short snippet due to news value.)

So THAT'S why they call it the "Nest": 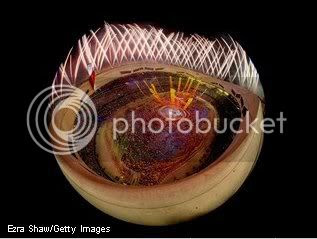 By this point, I am laughing out loud, but this is not the end, only the beginning of a much more profound sexual story.

First the throbbing circle throbs down, the colors deepen, the lights cool: 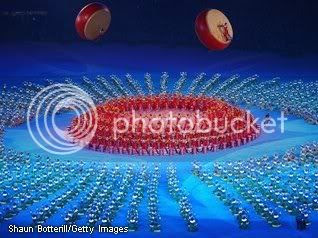 Around the outside of this tableaux enters a parade of uterine floats, with men banging on the cervix part of the uterus, using it as a drum, like they are trying to get in: 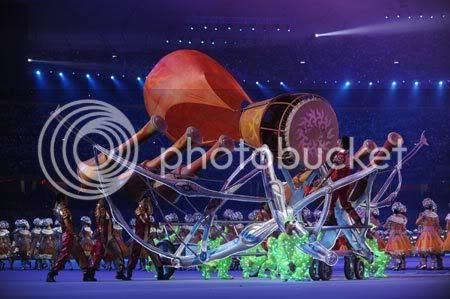 Photo from the Chinese People's Daily.

The particular float seen above seems to include fallopian tubes, or fimbriae, on either side of its uterus, allowing drummers also to bang out the release of the egg. Below is an anatomical drawing for comparison. 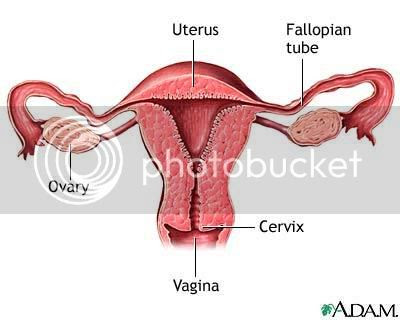 Those little fingers reaching out towards the ovaries are fimbriae.

On another uterine float, a woman atop the giant cervix plays the female part: 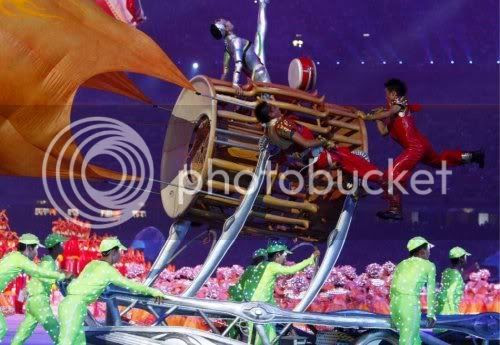 After the drama of the cervix, the girls surrounding the still hot central circle of men peel off into meandering sets of paired lines, forming a kind of circulatory system around the inner circle. Full body awareness, it seems, is beginning to return to the post-coital consciousness. In the semi-dark, round bicycles ringed with lights begin riding through the symbolic veins and arteries--the famous circulatory "chi" of the Tai Chi masters perhaps--while the inner circle still pulsates in semi-orgasmic bliss, a thousand arms waving sensuously, like the half-wafting/ half-active tendrils of a sea anemone. 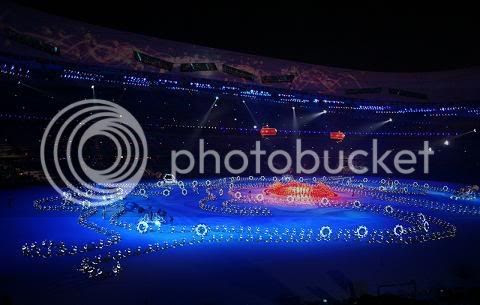 These chi bicycles finish up by circulating through the central circle, perhaps signifying the infusion of the zygotes with human spirit, while a single male figure, carried on a thin cable, spirals up from the inner circle towards the ovaries, symbolizing... what else could he be symbolizing but the journey of an individual sperm?

"Okay," I say to myself, "if I am right, the egg comes next, then the fertilization of the egg."

Sure enough, the circulatory system disperses and a huge all female circle forms, composed of a thousand (?) yellow-dressed girls. The yellow circle contracts to fill about a third of the floor, then a couple hundred purple-dressed boys on spring-steel jumping shoes enter from all sides and start bouncing around the yellow egg, looking for all the world like the familiar image of sperm bouncing around and against the cell wall of an egg, trying to get in. 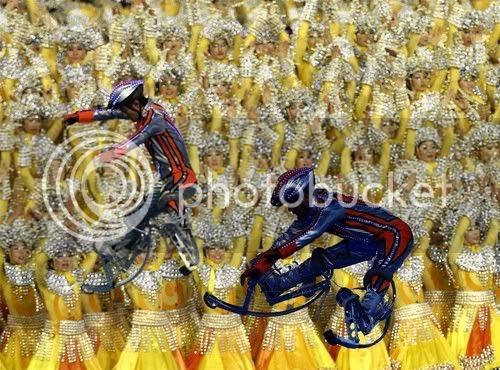 AP photo by Luca Bruno. (If AP wants me to take it down, there are plenty of others I can put up, but given the news value, I claim fair use.)

Notice that the egg-girls are wearing yin-and-yang insignias, a perfect expression for what is about to happen.

In short order, the egg wall is penetrated and the purple sperm-boys all rush to the center, as the egg-girls expand out: 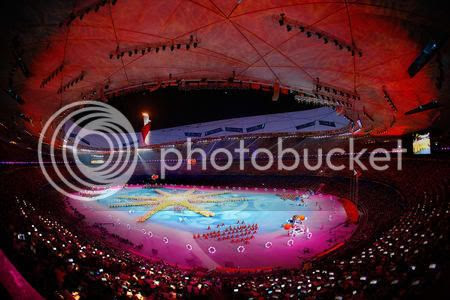 Once in the center, the sperms pack together to form the fertilized nucleus of the egg, while the yellow ladies spread themselves to fill the whole floor with a series of concentric circles, forming the albumen of the fertilized egg. Here is a video of the fertilization of the egg (2 minutes): 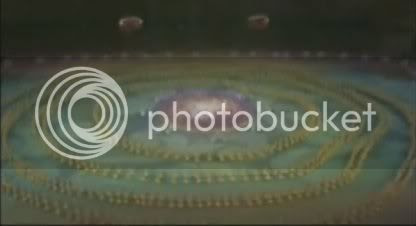 (Source video, from uZood, no longer available. I claim fair use on this as well.)

Wow. That's Bold. Really out there, and beautifully done. Entirely female centered though: female orgasmic from beginning to end, although the men on spring shoes do look like they are having as much fun as a bunch of one-track sperm should have, perfectly happy to have egg on their faces, torsos, arms and legs.

Of course the men are present throughout. They power the orgasm, and are joined in the orgasm, but everything is round. There is nothing phallic. Still, I shouldn't say that the production was female "from beginning to end" because I never saw the beginning, and here are some more pictures that make it look as if--what did Austin Powers say about oriental culture?--"the men come first." 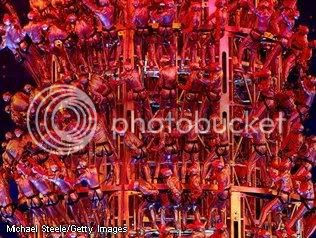 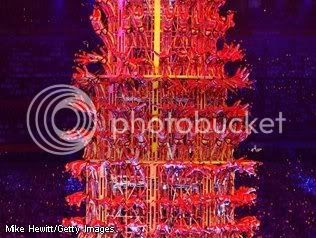 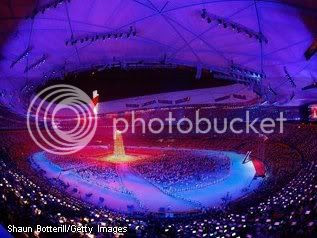 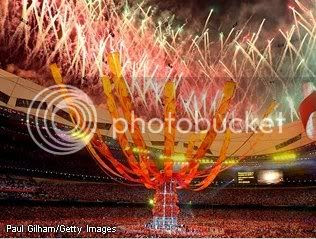 
P.S. Over at my normal blog (Error Theory): I put up a short introductory post: Zhang Yimou plays the best practical joke in history on Chi-Com leadership, and the world.

Choreographer Zhang Yimou is China's most famous film-maker. He has a long history of butting heads with Chinese censors (and of making sexy girl-centered movies).

I should have titled my post: "What if someone pulled off the best practical joke in history and nobody got it?" This isn't hidden folks. You are SUPPOSED to get it. The fertilation of the egg is the punch line, where everyone's suspicions about the obvious possible sexual interpretations of the preceding are confirmed.


P.P.S. I originally put up this post yesterday. (Sunday August 24, at 10:44 PM. First!) But for some reason Blogger flagged my new Closing Ceremonies Orgasm Blog as a SPAM blog (maybe because I made a zillion updates when I added links, more pictures, and video). Does updating cause flagging as a SPAM blog? It's the only thing I can figure.

They were going to freeze me for 20 days (and possibly delete the blog) so I decided to set up a new blog (this one, using "Closing Ceremony" in the name instead of "Closing Ceremonies"), since no one had linked me yet anyway. A bit of a bother, but I appreciate the free product. Thanks Google.
Posted by Alec Rawls at 7:26 PM

Holy hell - that is cool! Thanks so much for posting.

Alec Rawls
Here is a short bio I sent to press people covering the Flight 93 memorial debacle. My training is as an economist. I was in the PhD program in economics at Stanford until my research led me more towards moral theory and constitutional law, at which point I dropped the program and started working on my own. I was writing a book on republicanism (the system of liberty under law) for World Ahead Publishing when I discovered that the Flight 93 memorial was going to be a terrorist memorial mosque. World Ahead agreed to first publish my book about this rehijacking of Flight 93 (Crescent of Betrayal, temporarily available for free download at CrescentOfBetrayal.com). This is not my first venture into journalism. Over the years I have been a writer, opinions editor, and advisor for Stanford’s conservative campus newspaper The Stanford Review, and am currently on the Review’s board of directors.